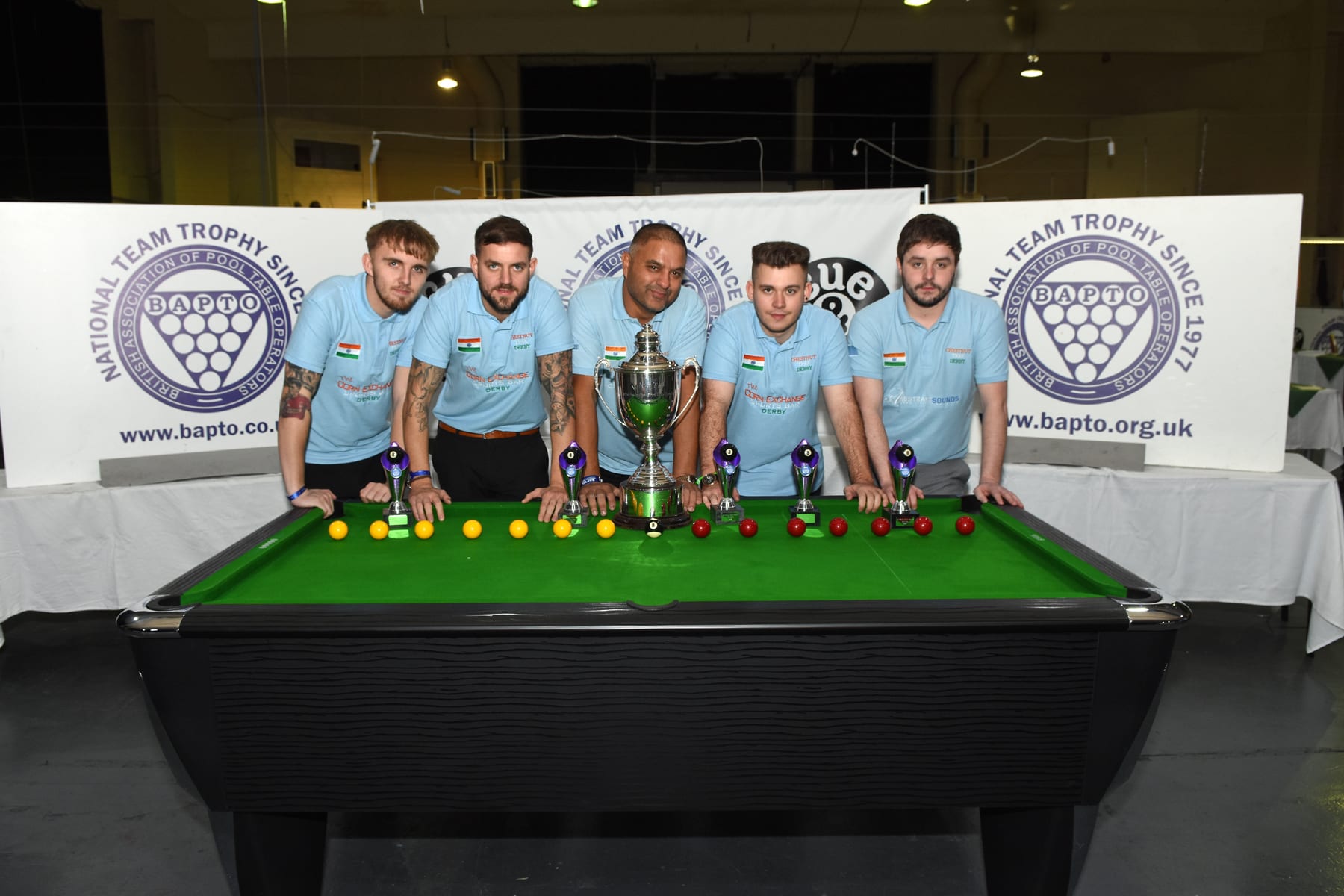 Big congratulations to all the winners and runners up of BAPTO 2016!

Some team names have changed slightly from previous years, as all teams are now required to incorporate the name of the pub or club they play from.

Team trophy was won by Reggi Gills team ‘Chestnut Daredevils’ AKA Desi Daredevils from Derby, who beat Murphy’s Sports Bar 6-4 in the grand finale. Both teams had been playing strongly throughout whole tournament, but the Daredevils really were smashing through their opponents. The finals were very close as Murphys were on top form but couldn’t quite supersede the ability of the Daredevils. Semi-finalists were ‘Wilsons Wigton’ and ‘Victoria Hookers’. Losing quarters teams are ‘Butchers Arms’, ‘McCluskeys’, ‘Millbrow PR’ and ‘Boxhead Boys’.

Plate event winners saw the ‘The Lamb’ from Edmonton annihilate ‘Breakers’ from Worksop 6-0. The Lamb had been playing well throughout all their matches in the knockout stages, losing very few frames. Semi-finalists were ‘Romany Volunteers’ and ‘Aberdare Con Club’. Losing quarter teams were ‘Lido Squirts’, ‘Cygnets’, ‘Spondon Lib Club’ and ‘Q8 Sports Bar’.

Big congratulations to the unstoppable Shona Lucas who has won the Ladies singles event for the 3rd year running! This is an amazing achievement and we wonder who can stop her in 2017? Shona breezed through the final beating seasoned pool player Donna Evans 4-0 in the final showdown. Losing semi-finalists were Sarah Middleton and Sabina Miah. Losing quarter finalists were Ashleigh Dinsmore, Vicki Lomax, Helen Thompson and Nicola Keenan. Ladies singles followed the same format as Men’s, with qualifiers held on Thursday and main event Friday night, with finals on the Saturday.

Mixed Doubles event started Saturday with finals played Saturday evening. John Sullivan and Donna Evans were crowned champions after comfortably beating Mark Dunn and Vicki Lomas in the finals 3-0. Their journey to the finals was not an easy one, with many matches won closely by 3 frames to 2. Semi-final losers were Anthony Buss with Nicola Glass and Men’s Champion Declan Brennan with Ashleigh Dinmore.